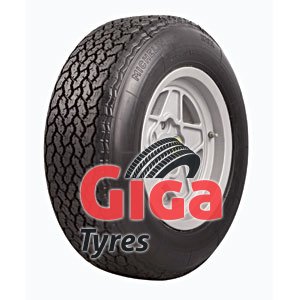 We only supply the tyre. If there is a rim shown in the picture, it is for display purposes only.

The only radial tyre which could be fitted on the fastest cars in the world in the 70’s, the XWX gives these high speed vehicles outstanding road holding and remarkable grip. A construction designed to reach 300 kph (186 mph)
The special features of the XWX mean that it gives remarkable performance, combining speed, driving pleasure and safety. The original design of its internal construction, together with its flexible carcass give exceptional comfort when travelling at very high speeds. Being a VR category tyre, the XWX can be used at
speeds in excess of 210 kph (131 mph) ; with a maximum speed of 270 kph (155 to 186 mph).

Dream cars
At the end of the 60’s, Germany and Italy were the leaders in the European motorway development programme. They were also the main producers of cars which could reach speed in excess of 200 km/h, (124 mph). The wide asphalt strips and the absence of speed limits offered a privileged few the opportunity to make full use of the
performance of these 'super-cars' at speeds which would be unthinkable today.